While it’s not the largest park in the city, Utsubo-koen Park’s central location and proximity to the chic, fashionable area of Kyomachibori makes it one of Osaka’s nicest parks to hang out in. Make sure you stop by if you’re in the area. 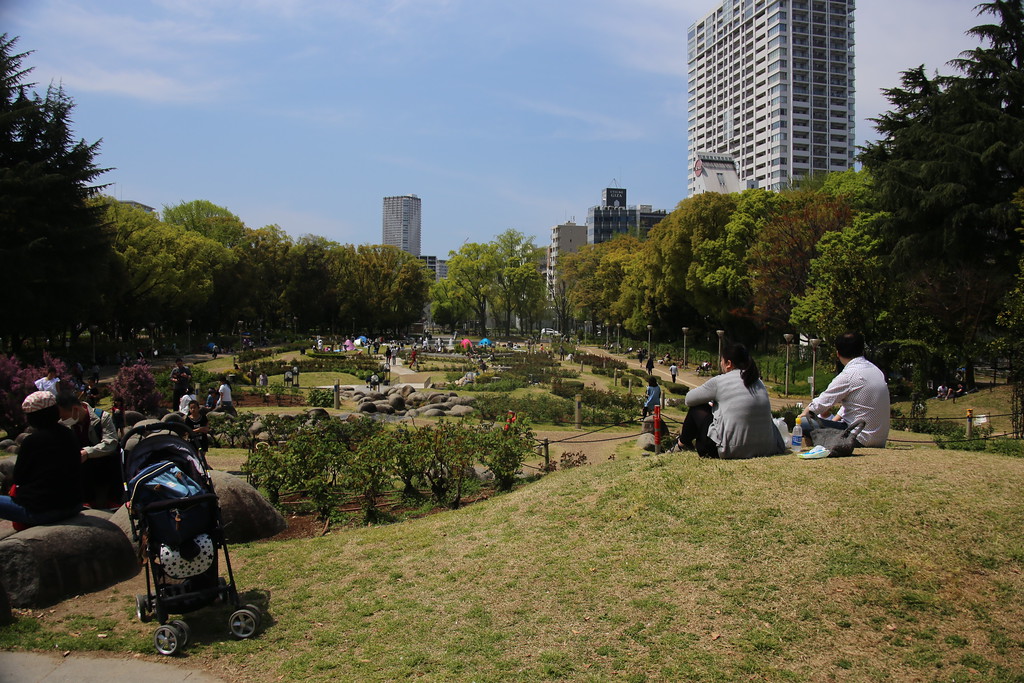 Originally built as a landing strip for the Allied Forces in 1945, Utsubo-koen Park was converted into a green space seven years later, before falling into disuse for several decades. That all changed in 2006 when the park was thrust back into the public spotlight to host the World Rose Convention. Today, it’s one of Osaka’s prettiest and most popular parks, and consequently is best enjoyed on quieter weekday afternoons.

With around 9.7 hectares of space, the park itself isn’t that large. Its oval rose garden - the oldest in Osaka - lines a small lawn space, and there’s a narrow stream running through the center. Cherry blossom trees planted throughout the park make it one of Osaka’s most popular hanami spots.

Naniwa-suji divides the park into east and west sections. In the east is the rose garden with over 160 varieties; to the west, you’ll find 16 tennis courts and the Utsubo Tennis Center, which occasionally plays host to international competitions. Northwards of the park is the trendy Kyomachibori neighborhood with its numerous fashionable cafes and shops.

The easiest access is from Hommachi Station on the Yotsubashi Subway Line. It’s just two stops from Nishi-Umeda Station. Climb the stairs at Exit 28 and follow Yotsubashi-suji Street to the north for two blocks until reaching the entrance to the park on your left. The rose garden starts at the top of the stairs just behind the clay tennis courts.

Nearest Hotels:
:: Check availability and pricing for hotels near Utsubo-koen Park on Booking.com or Agoda.com.

Near To Here:
Utsubo-koen Park is located in Osaka's Central district. See our complete list of things to do in Central Osaka, including places to eat, nightlife and places to stay.