The largest Korean neighbourhood in Japan is home to some of the best Korean food eateries and stores in Osaka. Robert Kodama takes us through the old and new market in search for an authentic Korean experience without the need of purchasing a plane ticket.

Tsuruhashi is easily reached by taking the JR Osaka Loop Line (Kanjo-sen) from JR Osaka Station to JR Tsuruhashi Station (Y180, 16 minutes). To reach the Korea Town area, take the West Exit of the station. This exit takes you directly into the heart of the covered shopping arcade of Tsuruhashi. This is the perfect starting point for diving into the historic stores that have been here since the end of the Second World War. The inhabitants of the area around the markets are predominantly of Korean descent, with 20% of the residents in the Ikuno Ward fitting this description. Most were either brought to Japan from Korea in the early 20th century during the Japanese occupation of Korea, or are descendants of those who were. These people, known as Zainichi Kankokujin (Japan-Resident Koreans), hold a special version of permanent residency granted to foreign nationals, and have thus made a living by transforming the area into a miniature version of South Korea. 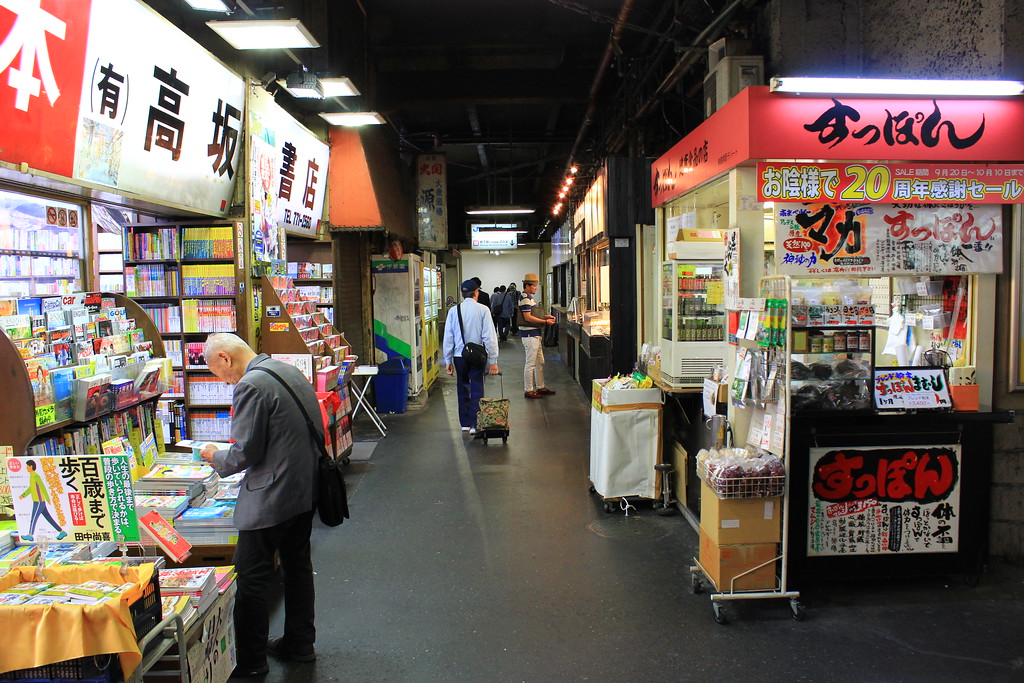 The market starts with an underground vibe, feeling quite separate from the outside world. It most certainly is a bubble of its own that hasn’t popped into modern society. I walk past elderly residents spending their time at the local bookstores and newsagents before being stopped in my tracks by something quite familiar from my travels to South Korea: that unmistaken aroma of spicy pickled vegetables that we know as kimchi.

The smell guides me around the dark corner to a narrow corridor lined with vibrant variants of the colour red. The dark feeling that pervades the area by the station transforms into light and noise as local vendors tempt you into trying a sample of their spread in the hope that you will part with your money for more. I duck away from the enthusiastic vendors back into the dark again. 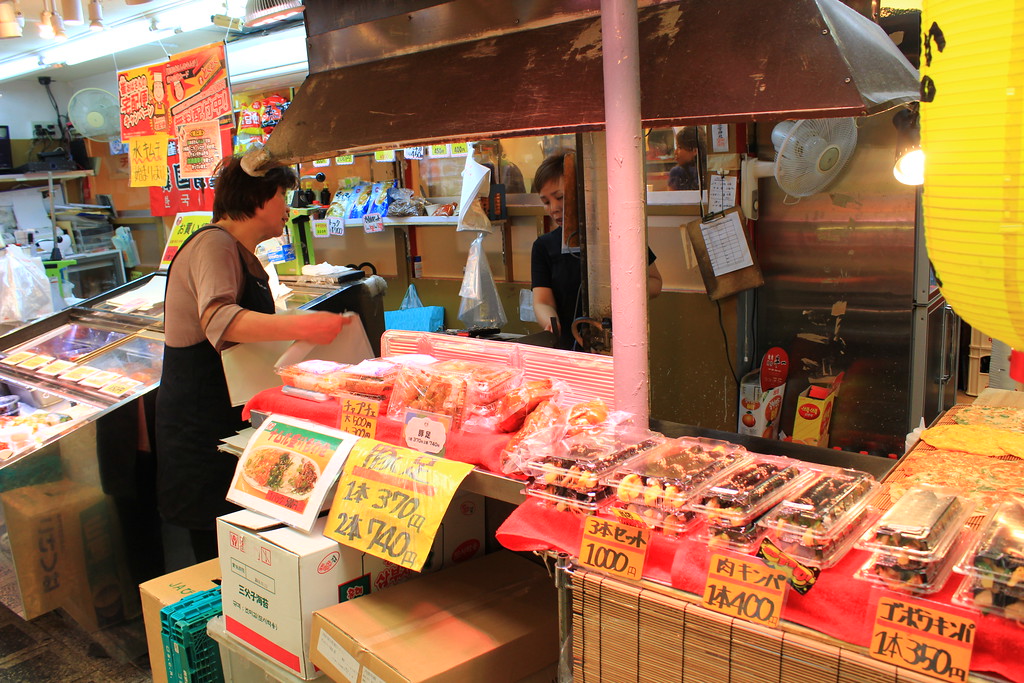 The corridors become smaller and there are plenty of corners to navigate. Many of the stores are shut, perhaps permanently, but every so often there is just one store amongst the shutters where an elderly person is selling whatever stock they have, perhaps dried food or old clothing. I continue to turn left and right until I come across a butcher selling every possible piece of a cow. Every organ was neatly separated into metal trays and set in its place with a price tag. It was a little strange to comprehend that so much of an animal could be digested, yet somewhat glad that the animal was not wasted in any manner. One final corner took me to a market oscillating with life. 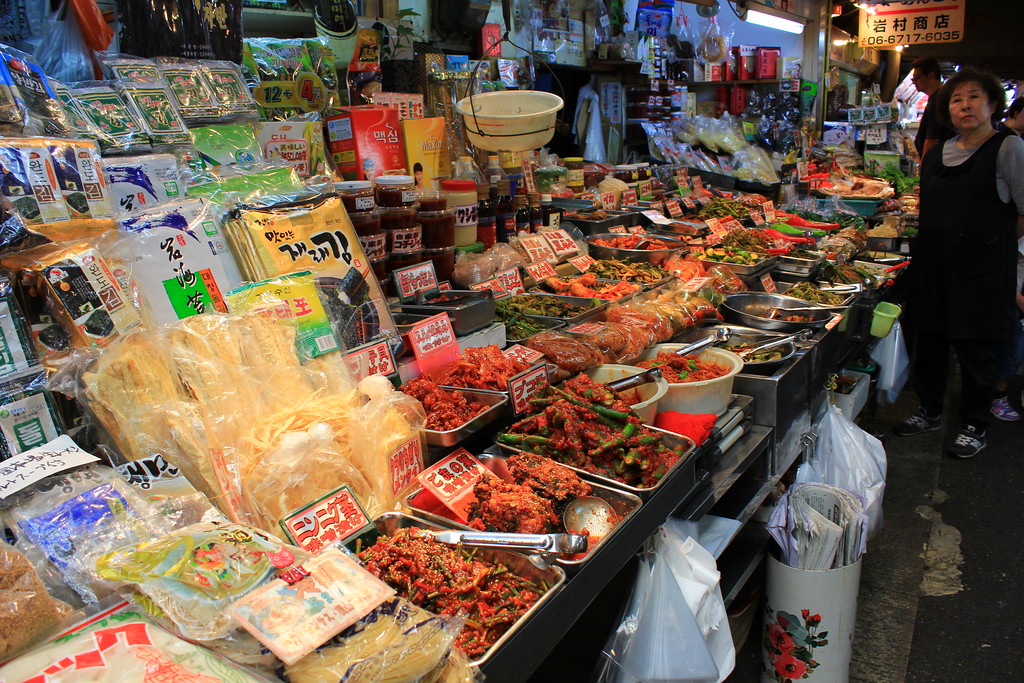 Bustling locals and vibrant colours greet me in a market akin to one you might see in a travel documentary on backpacking through Southeast Asia. Noise surrounds me as I take my steps forward and I try to process my environment. Every sense is stimulated as strong smells of further pickled vegetables and strong colours of fresh vegetables line the sides of this market. 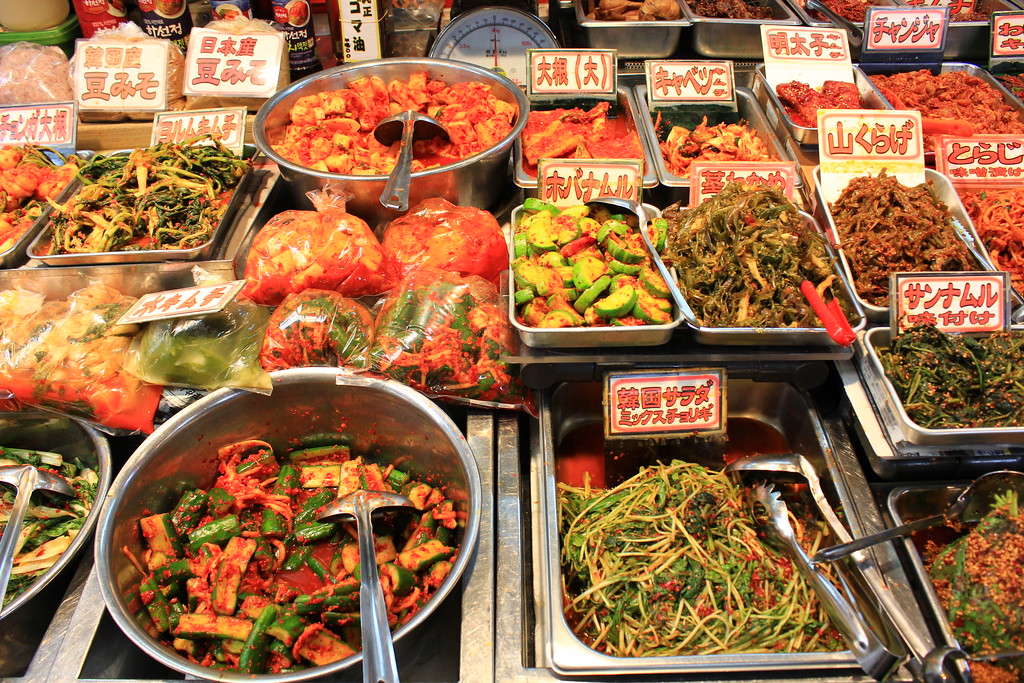 There are stalls selling seafood products, some of which seem unusual to me but not so much to the nonchalant residents out on their grocery shop. One important concept that occurred to me whilst staring at the poisonous blowfish lying on the ice in front of me, is that the market acts as a meeting place where local residents can mingle. After spending time gazing at the market stalls, I headed down Hon-dori Street (the main market road) and exited the old market. The sights and smells of the market had made me hungry and I knew exactly where to find good Korean restaurants.

The new Korea Town market street is a short walk from the old market. The large signpost at the starting point combined with the lampposts decorated in traditional Korean patterns make it easy to find. This newer market provides a closer experience to South Korea in modern day times. 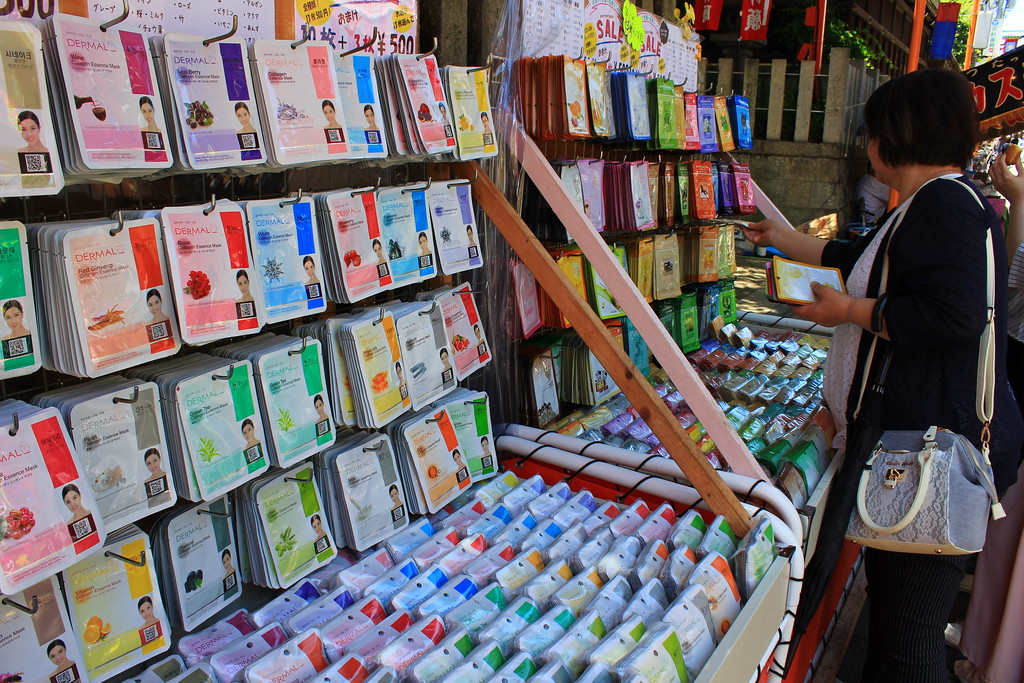 As I walk under the large sign, I am instantly greeted by stores selling the latest Korean cosmetic products and face masks which line the street outside the stores. South Korea is renowned for its high-quality, and sometimes slightly bizarre, cosmetic products. I stop to buy some face masks for a friend, though choosing between familiar options such as Tea Tree and the more unusual Snake Venom took some time. As I continued to explore the market, I couldn’t shake the feeling that I was walking through the market located close to Nampodong in Busan. Having briefly forgetting that I was indeed quite hungry reminded me to search for a restaurant nearby. 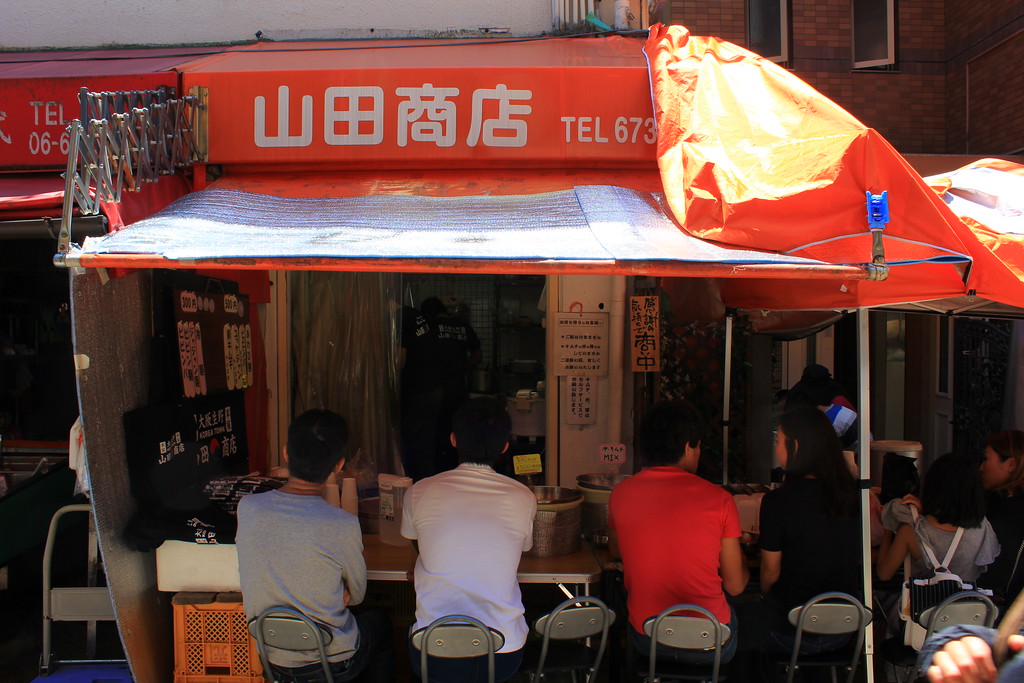 My first stop is a typical Korean noodle restaurant with seats and tables on the street outside. Yamada Syouten (山田商店) is part of a larger store selling pickled vegetables but their noodles are definitely something not to be missed. Prices start at ￥300 for a bowl of rei-men (冷麺) which are cold noodles served with vegetables, topped with an egg and a spicy sauce for mixing into the soup. 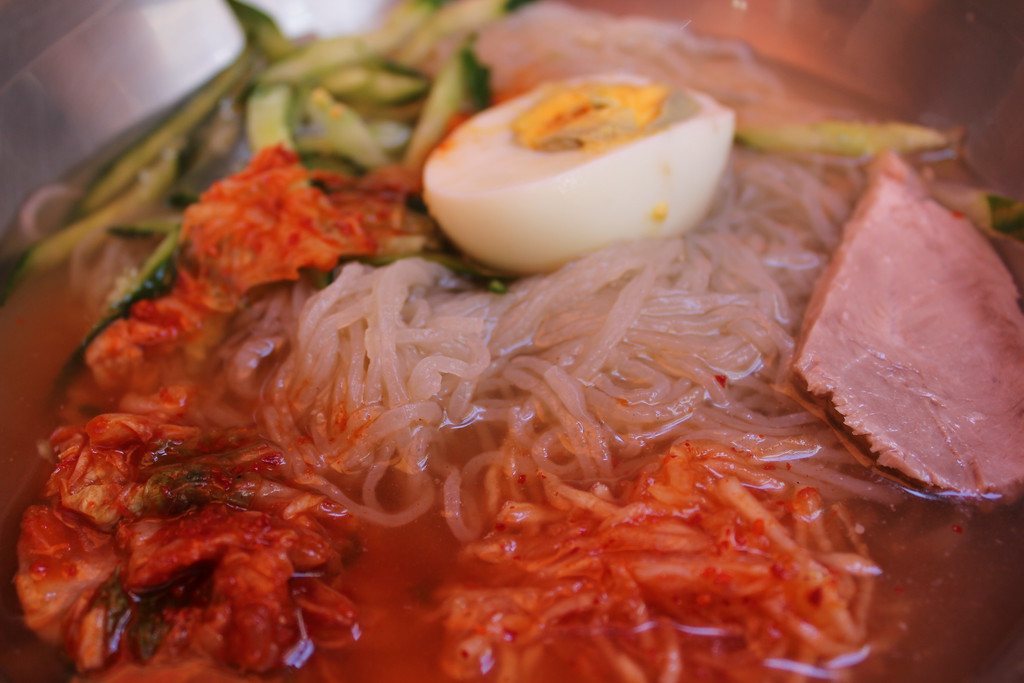 There is also jya-jyan-men (ジャジャン麺) on the menu for the same price. These are thicker noodles served in a thick, brown savoury sauce. 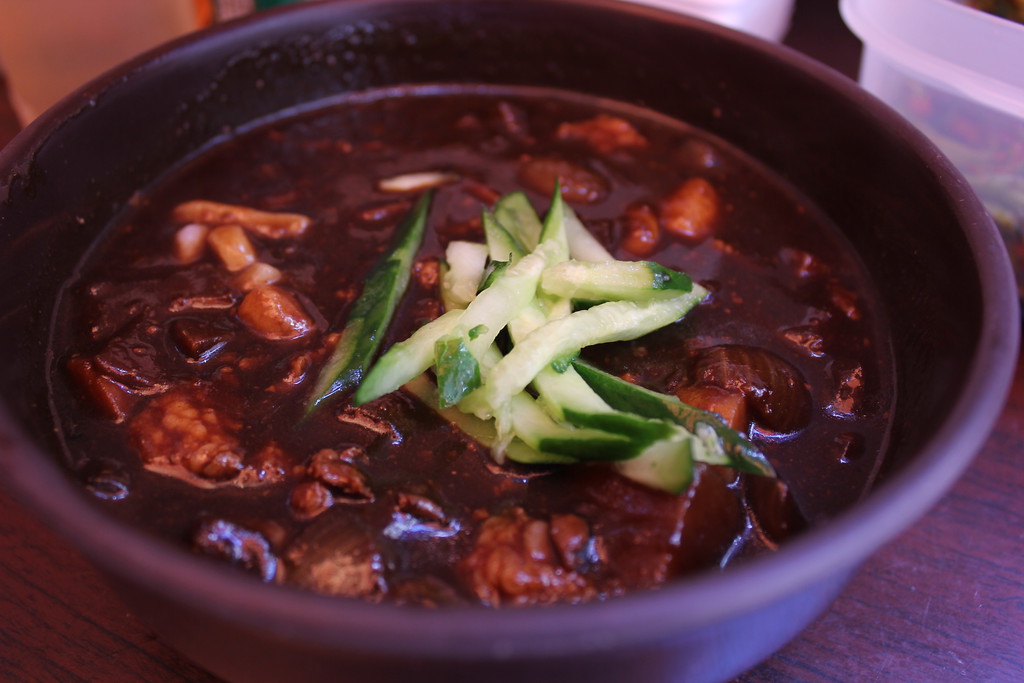 I order one of every noodle-based dishes available and tucked right in. The flavours were authentic and positively pungent. Free pickled vegetables, presumably from their larger store, are available on every table to compliment your main dish with a spicy punch. After devouring the noodles, I was ready to move onto the next restaurant. 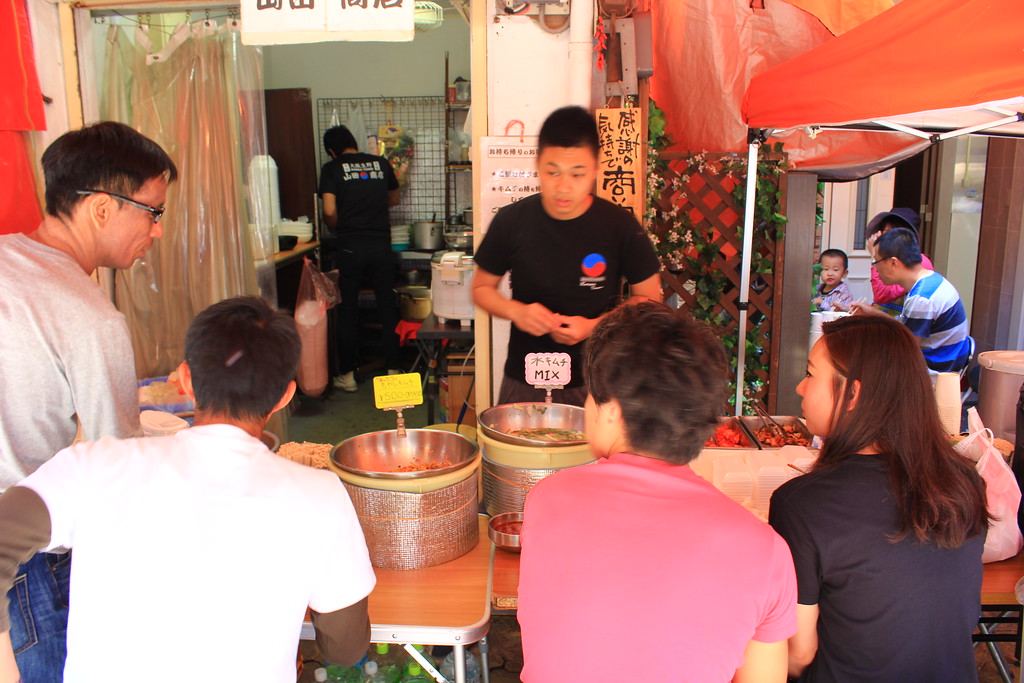 I approach the Korean BBQ restaurant with much anticipation. Minzokumura (民俗村) is a typical restaurant serving up various buffet courses of yakiniku (焼肉 - grilled meat) in the style of Korean cuisine. I opt for the samgyopsal (サムギョプサル) course which is an all-you-can-eat pork yakiniku course including side dishes priced at ￥1980 plus tax per person for 90 minutes. 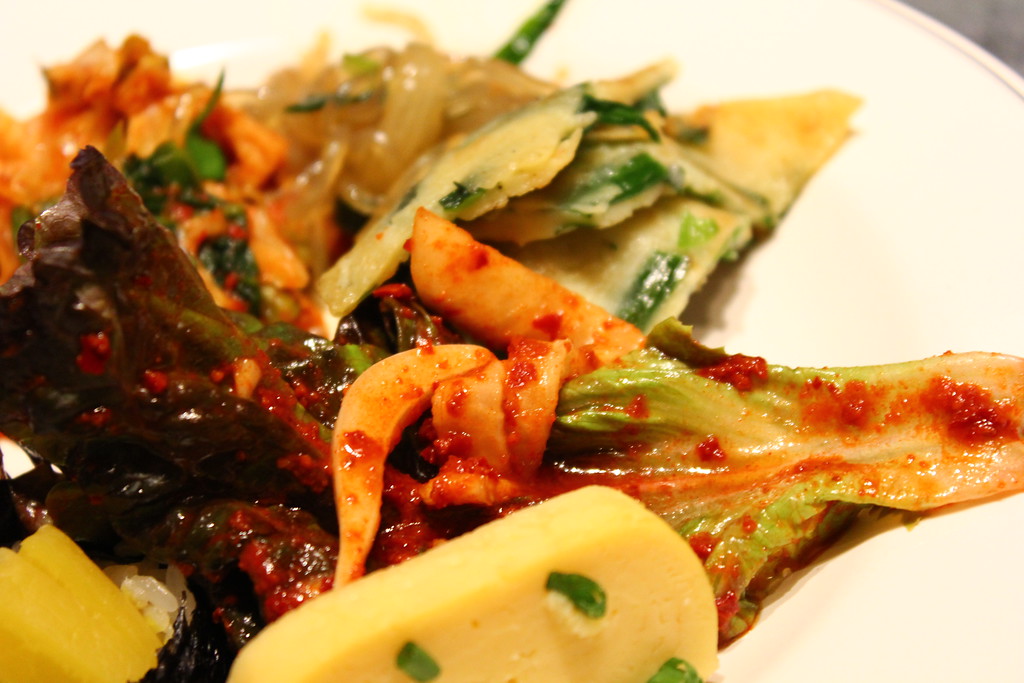 Upon ordering, I head for the vegetable buffet laid out on the side of the restaurant. I pick up lettuce leaves to wrap the samgyopsal BBQ once it arrives, as well as some other Korean dishes such as the Korean version of a seaweed roll (海苔巻き). The meat arrives and putting it on the grill sends flames high over the table. 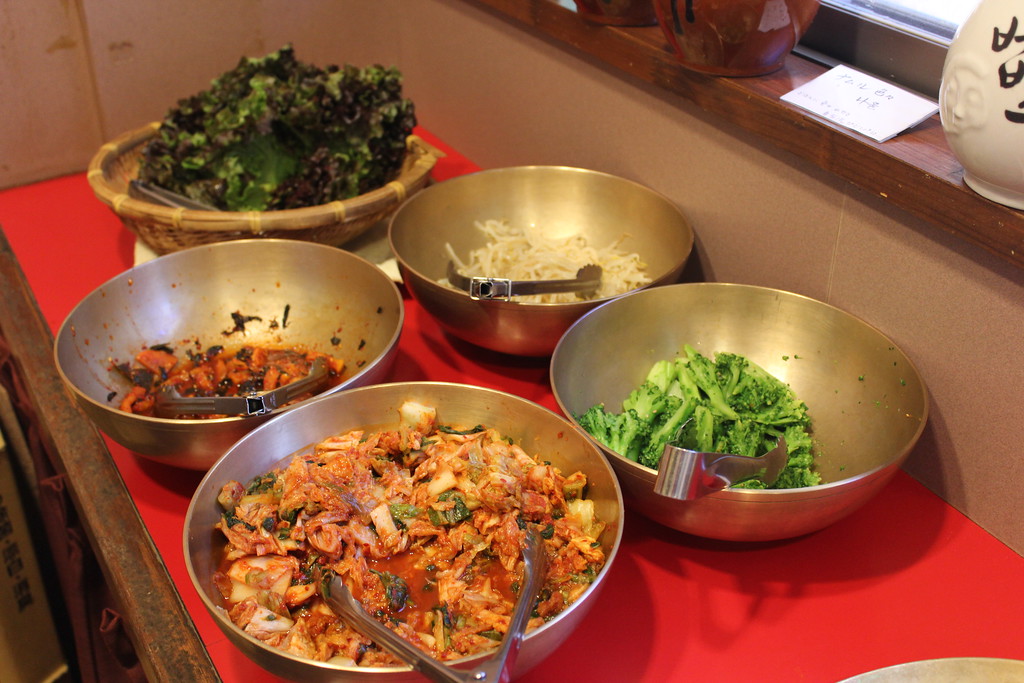 Once the meat has sufficiently cooked through, I place it into a lettuce leaf, add some of the various sauces available, and dig right in. 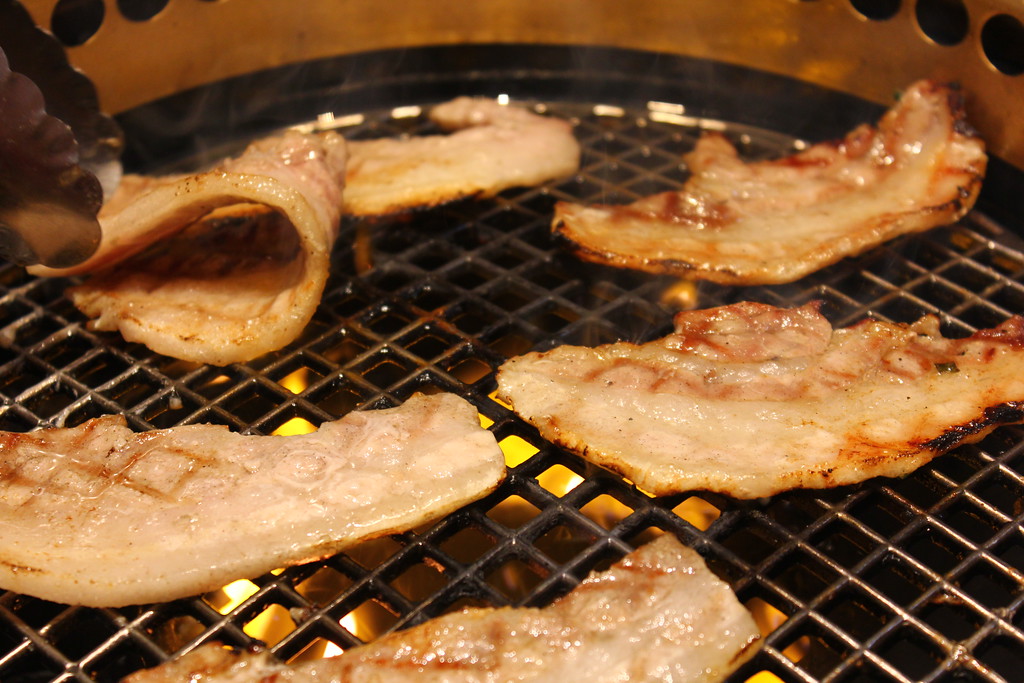 The cooked meat ready to be eaten - image © Robert Kodama

Again, the flavours are authentic and delicious. With 90 minutes available, you are most definitely able to get a good, hefty stomach full of real Korean food. 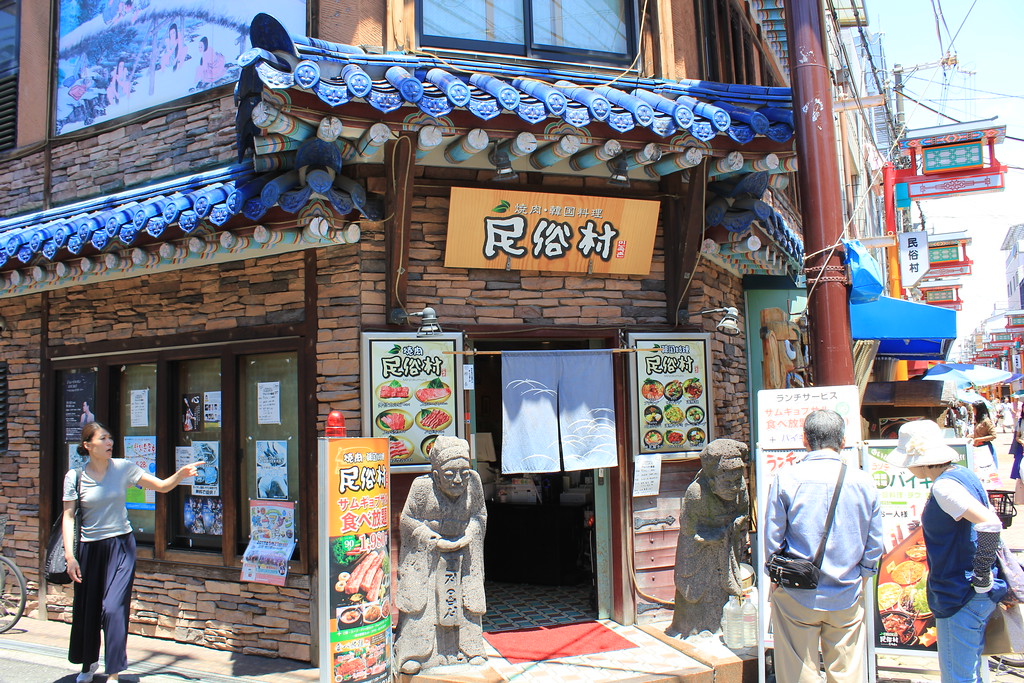 The Korea Town in Tsuruhashi is one of the most famous Korea towns in Japan, and rightfully so. The authenticity is enough to provide an immersive illusion that sends you to Korea for the price of a local train ticket. If you are looking to eat and shop in Korea, then perhaps Tsuruhashi should be your next stop.

About Robert Kodama
Robert Kodama is a travel writer and photographer based in the Kansai region of Japan, and is the author of My Airport Ramblings. He is also a writer and director in performing arts. Text and original photographs by Robert Kodama.