Shinsekai might mean 'New World', but it’s one of Osaka’s older, more retro neighborhoods. Increasing tourism to the area means it’s far less seedy than it used to be, but there’s still some retro post-war charm to be found here and there. 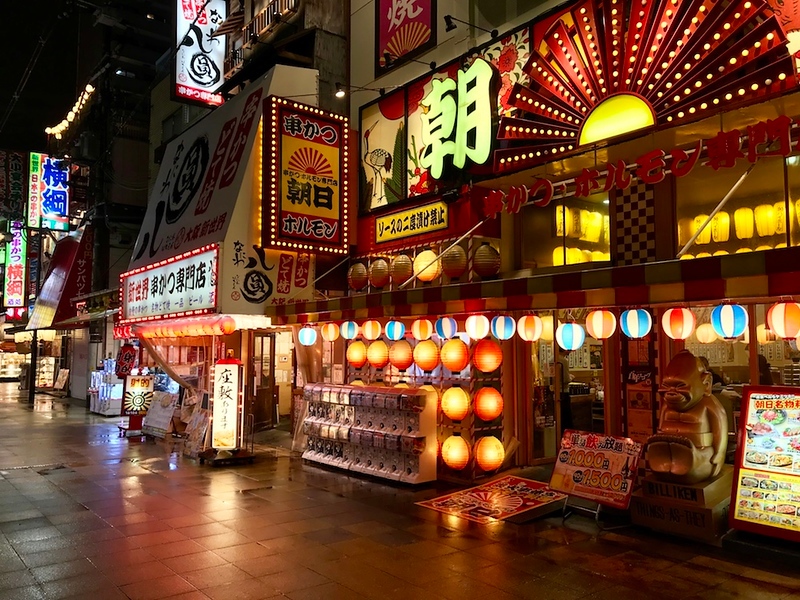 Shinsekai used to be considered one of Osaka’s seediest, most ‘dangerous’ neighborhoods - though ‘dangerous’ by Japanese standards generally pales in comparison to other similar neighborhoods in cities around the world. Developed before WWII and then neglected for decades afterwards, it’s home to a cluster of retro, raucous eateries, dive bars, and a number of delightful surprises to stumble on.

The focal point of the Shinsekai neighborhood is Tsutenkaku Tower, which looks very much like the Eiffel Tower. That’s unsurprising, given that the northern half of Shinsekai was modeled after Paris. At around 100 meters in height, you won’t get the commanding views of the Abeno Harukas observatory, but it’s a lovely place to look at the neighborhood below.

In culinary terms, the area is most famous for its kushikatsu eateries. Kushikatsu refers to a genre of deep-fried, battered skewered food that you eat dipped in sweet tonkatsu sauce. You could have anything in your kushikatsu - meat, vegetables, cheese, and even fruits. It’s exactly the kind of hot, greasy food that’s great after a late night of partying - or just any time of the day. Kushikatsu chain Daruma is headquartered there, but there are plenty of other great restaurants like Tengu, too.

Increased tourism to Shinsekai in recent years has caused no small amount of gentrification in this area. As a result, it’s far less seedy and gritty than it used to be, and you’ll see plenty of non-locals in the area looking for a taste of old-world retro charm. If you’re expecting a truly off-the-beaten-path neighborhood in Osaka, you’ll be disappointed, but there’s plenty of fun to be had here still.

For further insights into the Shinsekai neighborhood, see our detailed Shinsekai guide.

Nearest Transport:
Subway: In front of exit 3 of Ebisucho Station on the Osaka Metro Sakaisuji Line.
Train: 5-minute walk from the east exit of Shin-Imamiya Station on the JR Osaka Loop Line and Nankai Main Line.

Nearest Hotels:
:: Check availability and pricing for hotels near Shinsekai on Booking.com or Agoda.com.